A conversation with Jorge Colón Delgado—Official Historian, Puerto Rico Professional Baseball League, and long-time Negro Leagues researcher—sheds some light on why he developed a website titled negroleaguerspr.com focusing on more or less 217 Negro Leaguers who played professionally in Puerto Rico. “There is a lack of awareness of what these players accomplished in Puerto Rico,” stated Jorge. “Now is the opportune time to share this website with researchers.”

A short-term goal is to be “proactive” in having Puerto Rico baseball stats in place, so that the Stateside and global public, including researchers and Negro Leagues historians, have access to player summaries and stats for their Puerto Rico seasons with teams, including Aguadilla Sharks, Caguas Criollos, Guayama Witches, Humacao Oriental Grays, Mayagüez Indians, Ponce Lions, San Juan Senators and Santurce Crabbers. “Let’s uncover this mystery,” noted Jorge.

Simply put, much more is known about Negro Leaguers playing in Cuba and Mexico, than in Puerto Rico. This reality will be rectified in 2021 (short-term) and beyond (long-term). Future plans include blogs—in English—by Jorge Colón Delgado, Raúl Ramos and Thomas E. Van Hyning, which highlight special accomplishments on the field by legends such as Josh Gibson, Satchel Paige, Monte Irvin, plus another 12 Negro Leaguers inducted in Cooperstown.

These blogs will also highlight and emphasize the positive “comfort level” of these players in Puerto Rico, in terms of [Stateside] Negro Leaguers enjoying the Island’s hospitality. They overnighted at the best hotels and dined at the finest restaurants. Players had time for fishing, socializing in town plazas and having dinner at homes of teammates, fans and team officials.

Future (longer-term) blogs may cover “what if” scenarios—what if Josh Gibson had been able to play integrated MLB. 1930-1946? What if Babe Ruth had played integrated MLB, 1914-1935? Circling back to Puerto Rico, Willard Brown got to visit La Fortaleza (Governor’s Mansion) in Old San Juan, and be honored and recognized for his baseball prowess in Puerto Rico and Caribbean Series events. Mr. Brown never received proper recognition in St. Louis, Missouri, for being the first African-American to play in a 1947 American League contest. Yet, he was an idol in Puerto Rico, receiving multiple Player of the Week Awards with cash and clothing gifts.

Jackie Robinson played a 1948 exhibition game (spring training period) in Puerto Rico, with Brooklyn, but not in Puerto Rico’s Winter League. However, he nearly managed the 1950-51 Mayagüez Indians. His signed contract with the Mayagüez baseball club was voided by MLB Commissioner Happy Chandler on a technicality: Commissioner Chandler did not review the agreement “before Jackie Robinson signed it.”  Conversely, Frank Robinson did not encounter the same obstacle as Jackie Robinson when he got his first opportunity as the Santurce Crabbers 1968-69 manager.  He was still managing Santurce, in 1974-75, when the Cleveland Indians signed him to be their 1975 manager, in a dual role of player-manager.

Another reason for creating this web site pertains to the June 28-July 2, 2017 Society for American Baseball Research (SABR) Convention at the Grand Hyatt Hotel in New York City. A record attendance of 806 SABR members and friends enjoyed SABR 47. Jorge conversed with attendees, versed in the Negro Leagues, who were not aware that Josh Gibson was Santurce’s first manager in the Crabbers 1939-40 maiden season, and that Jackie Robinson had signed a contract to manage the 1950-51 Mayagüez Indians. Jorge was saddened at this lack of awareness, and  knew that he had to do something about this.

Santurce’s Willard Brown set the Puerto Rico Winter League single-season HR record with 27, in 1947-48, a 60-game season! Bob Thurman joined Santurce in 1947-48 and formed a dynamic one-two punch with Brown, one compared to Babe Ruth-Lou Gehrig. Luke Easter, first player to homer over the CF wall at the Polo Grounds (1948), was League MVP with 1948-49 Mayagüez. 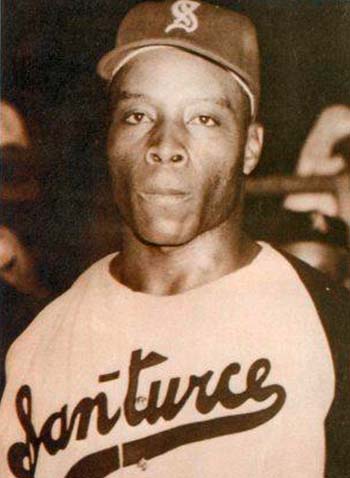 4 thoughts on “Puerto Rico’s contribution to the Negro Leagues”